Celtic Kings of Oklahoma: Interview with The Righs 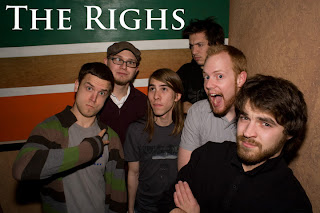 The Righs are one of those bands who have been around for a long time, but you really don't hear enough about. If you're not from the Oklahoma City area, there is a slim chance you've seen them live.But this Celtic punk outfit is well worth the effort to see live. I was lucky enough to find this band my band opened for The Toasters in Tulsa around 2010, and they kicked off the show. After watching their energetic set, I couldn't help but wonder why we they weren't playing right before the headliner.

Jump to 2013, the band is in the process of recording their third album. The whole band was kind enough to spend some time answering questions.

PIOK: Could you introduce yourself and tell us what you play in the band?

NATE: My name is Nate Williams. I play acoustic guitar and am one of three lead vocalists (along with Jack and Omid).

JIAN: I am Jian Azimi and I play the fiddle!

PIOK: How did The Righs come together?

PIOK: I have heard the band’s name pronounced several different ways, what is the proper way to say it? What does it mean and how did you decide on it?

NATE: This is something that we’ve been correcting people on for years, but we kind of brought that on ourselves by picking a weirdly spelled name. It’s pronounced “rigz” with a hard “g.” A lot of people pronounce it as “rise” when they first say it. Righ is a modern spelling of the Gaelic word Rí, which means “king.”

JOHN: We picked it because our previous name ended up belonging to another band overseas.

PIOK: You’ve been a band for around eight years now, right? How has the band changed from when it first started?

JACK: We started by figuring out some sort of base to build the band on, then skewed way away from that, and now I feel like we've come back a bit wiser for it.

JIAN: There’s a lot of input that comes in now from all sides. Omid has taken a larger role in writing songs that have a different mood and feel than what Nate and Jack provide. The drummer position was also a hard one to nail down. I can’t even keep straight how many we've had… Four? Five? Anyway, when Ronnie came on board, the relationship of the band as a whole got tighter, and I think we enjoy playing our music even more.

PIOK: You are currently working on your third full length album, how is that coming? Can you give us some details on the album itself?

NATE: I will say that we’ve got a great engineer/producer, Jeremy Ralstin, we’re working in a really high quality studio, and we’re recording songs that people have been bugging us to record for years. We’re feeling pretty confident that, no matter what form it takes, this is going to be a great release and we’re hoping to turn some heads.

PIOK: I think Omid hit it right on the head. Is this album much different than your two previous offerings? If so, how did that difference come about?

JACK: It's somewhere between the first two. Like I said, we came back to our roots a bit more on this one.

PIOK: What was the process for writing this album?

JOHN: The process for this release has been much like it’s always been. Typically, one of us will write the basics of a song, the lyrics, chords, maybe a melody or two, and then everybody else contributes their own ideas on how to make the song better. While we may still say “That’s Omid’s song,” or “That’s Jack’s song,” the reality is that we have a very collaborative songwriting style.

PIOK:The most common description of your sound is Celtic-punk. How did the Celtic sound develop for you?

NATE: The big thing is it was a sound that we enjoyed listening to and enjoyed playing. It was a conscious decision, rather than where we ended up.

JACK: Through heritage and research we've tried to create a Celtic yet modern sound that's all our own.

PIOK: The band lists its influences as everything from Flogging Molly, to The Mighty Mighty Bosstones, to Chuck Berry. How did/do all of those sounds come together to form your music?

JOHN: Here’s the thing, our influences change, depending on who in the band you ask. I think that we all have our own personal influences and just choose personally what to bring to the table with this band.

JIAN: There are a lot of talented people playing in this band, the different inspirations and influences come from each person. At times, when songs are developing, ideas and lines can get crossed and muddled. Fortunately, everyone is receptive to constructive criticism and the songs all work out well. 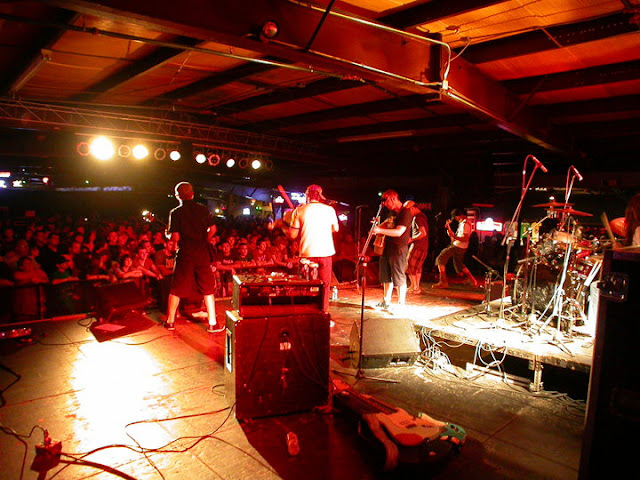 PIOK: Which local bands do you like playing with the most? Are there any Oklahoma bands who you feel have been instrumental to where you are now as a band?

JOHN: I’m going to sidestep this question and say that it doesn't matter what band it is, or even what genre they play. It’s a good attitude and a sense of comradely that makes playing shows anywhere turn out to be a good time, no matter what the venue is or how big of a gathering.

PIOK: Where are you favorite places to play live?

JOHN: That depends on how patient and enthusiastic the person running sound is with us, on the atmosphere that the people (including ourselves) bring in, and on the amount of alcohol imbibed.

PIOK: How many shows do you play a year?

NATE: It varies. With so many of us in the band, all of us with busy schedules, significant others, etc., it can be difficult. I think we've already played more shows this year than we did in all of 2012. Ballpark is probably 20-30 shows a year, normally.

PIOK: Thanks for taking time to answer questions. Where can people go to hear your music online?

All kinds of places!

You can stream both of our first two albums at our BandCamp page – therighs.bandcamp.com – or on Spotify. We've also got all our songs on Soundcloud - https://soundcloud.com/therighs

You can purchase it from iTunes, eMusic, Amazon, cdBaby, and just about any other digital music retailer as well.
Posted by punkisok at 3:21 PM

About Punk is OK

punkisok
Oklahoma, United States
Providing news, reviews, and interviews from the worlds of punk, ska, reggae, and so on.